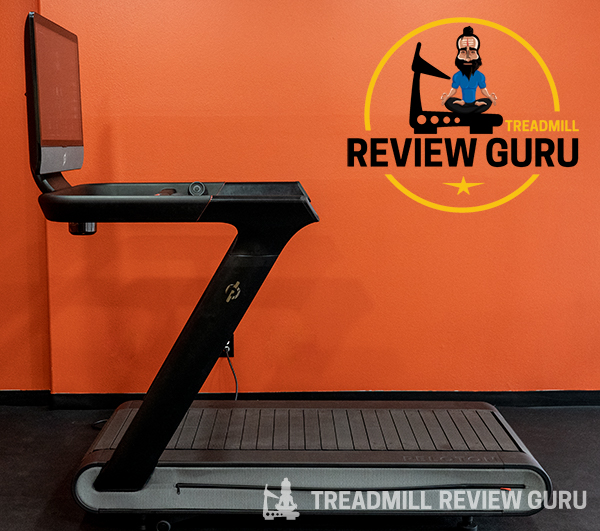 The Tread is the newest piece of fitness equipment in the Peloton lineup. It is designed similar to a Woodway treadmill with rubber slats that run horizontally along a reinforced platform. There is no cushioning in the deck and it does not fold up, but the rubber slats are designed to absorb shock while they move underfoot. It has a massive 32” touchscreen attached to the front to showcase Peloton’s vast array of classes and trainers. While the Tread is certainly different and cool, it has an asking price of $4295, which is on the top end for home fitness equipment. We’ve evaluated the hardware and software on the Peloton Tread to see if it’s worth the heavy sticker price.

Who It’s For: The Peloton Tread is for die-hard Peloton enthusiasts who love the content and are willing to try a unique treadmill design with a hefty price tag

The Peloton Tread is sturdy. At 455lbs, it sits firmly on the floor. There are four leveling feet under the deck you can adjust so it sits squarely without rocking or tipping side to side. It feels sturdy even when fully inclined. Solid steel beams reinforce the deck and the slat belts offer good support. Uprights are power-coated steel, so they are firm as well. A zipper on the side of the track opens for extra storage. 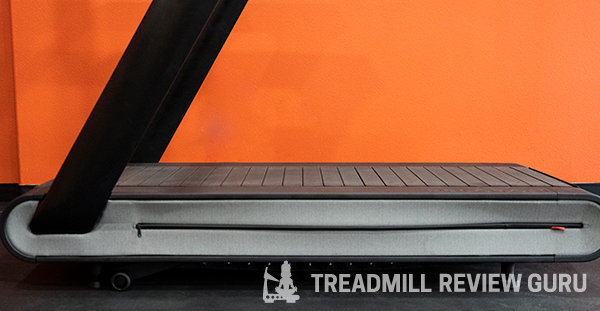 Our concerns with the frame are a limited warranty and lighter than expected weight capacity. While it weighs 455lbs, the Tread will only support 300 pounds, which is lighter than we would expect considering the solid construction. The warranty on the frame is 5 years, which is half what you will get on a NordicTrack treadmill and Sole treadmills offer lifetime warranties, so 5 years is on the lower end — especially for fitness equipment over $4000. The warranty for labor, parts and touchscreen is only one year. 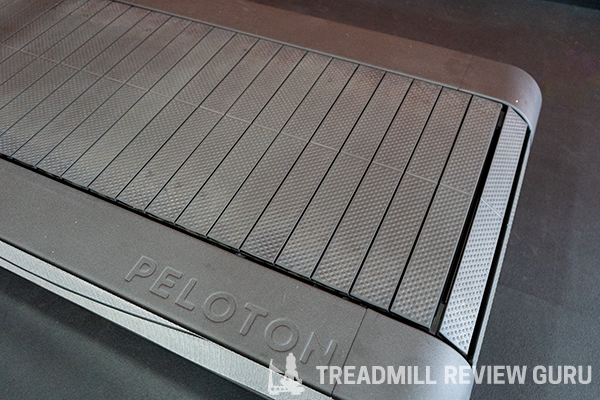 The Tread has a 2.0 HP motor, which has been mentioned as a concern by potential users. Most other treadmills in this price range feature 4.0 or 4.25HP motors. However, the Tread has an AC motor rather than a DC motor, so even though it is only 2.0 HP it generates plenty of power. The Tread never feels underpowered or like it’s lagging. Peloton recommends a dedicated 120V, 60Hz, 15A circuit so you don’t trip a breaker while operating. I am impressed with the Tread’s power. It gets up to speed fast and transitions between inclines and speeds quickly. 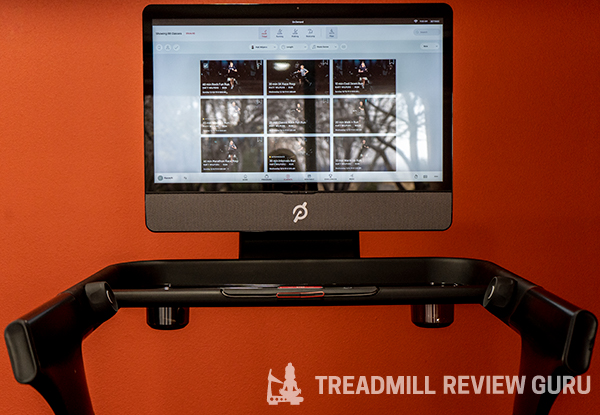 The 32” touchscreen is clear and easy to see. I find Peloton screens to be the best on any fitness equipment. This makes sense, since content is the main selling feature for Peloton. Touchscreen capabilities are quick and responsive, even with sweaty hands, and the screen is easy to see and navigate. The screen pivots up and down so you can adjust it to avoid overhead glare or reposition if you have multiple users. The screen does not rotate side to side however, which is a bit of an issue if you are doing a floor class off the treadmill. The screen is large, but you have to stand directly behind or to the side of the treadmill to see the instructor. It would be nice if the screen rotated side to side. 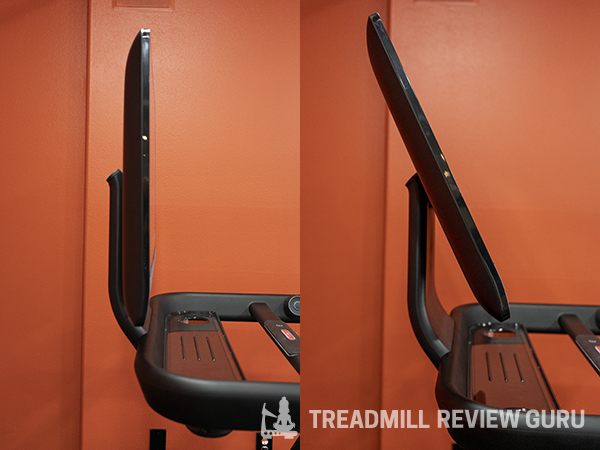 The other issue we had with the screen is the way it is attached to the frame. The screen is not embedded as part of a solid console, instead it hovers at the front of the Tread and is connected via a steel bar in the back. When running fast or hard, we found the screen rocked and wobbled noticeably. While the design looks simple and chic, limited structural support for such a large screen creates stability issues. 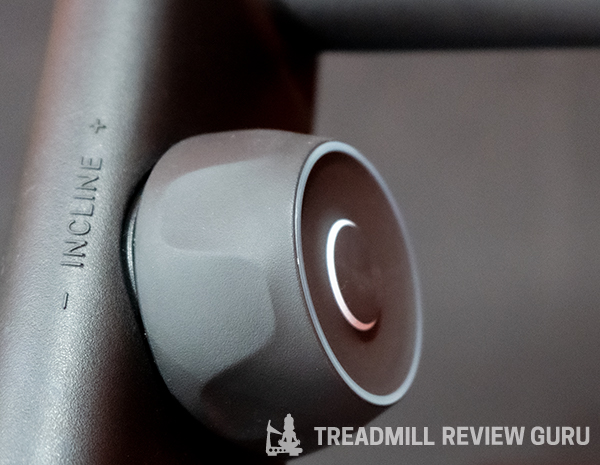 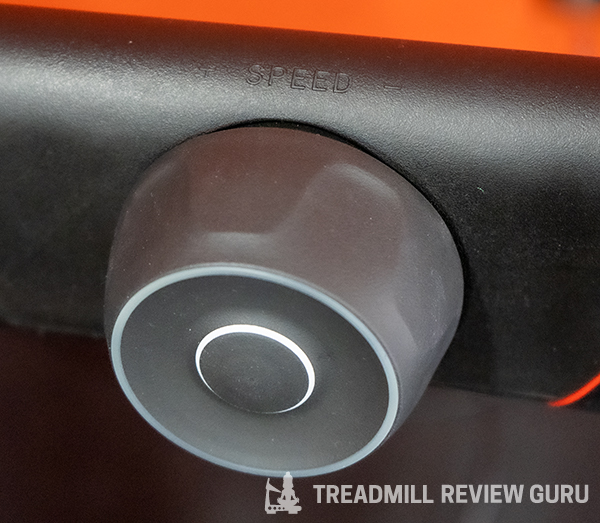 There is no fan on the Tread. Fans are really useful, especially on a piece of equipment this size. Because it is so large, most people will probably place it along a wall or in the corner of a room. This limits options a little for setting a fan close by. Also, at this price point it’s kind of annoying to have to also buy a fan separately. It would be nice if the Tread had a fan in the console. 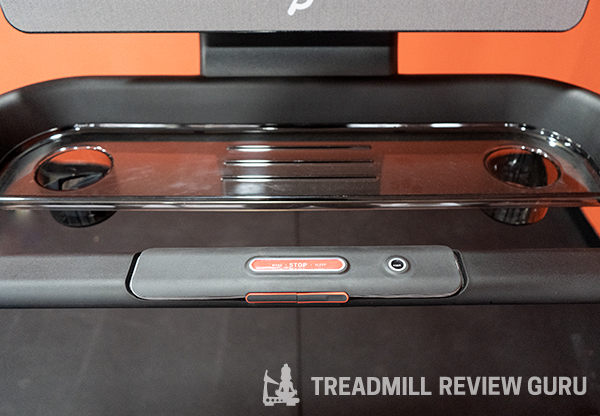 A plastic storage tray spans the width of the treadmill. It has two cup holders, one on each side. This tray is really flimsy — which is a surprise since everything else on the Tread feels sturdy. The plastic tray is easily bendable. Water bottles placed in the holders rattle around when you run. The tray is great for holding a phone or something light, but we don’t recommend placing anything heavy or valuable here.

The Tread provides a healthy foot strike while running. The horizontal design of the slats increases stability; they move steadily across the platform to create a really comfortable surface. It never feels (or sounds) slick and I don’t find my foot catches on the grippy rubber slat. However, the lack of cushioning under the deck is noticeable. Foot fatigue and joint discomfort are noticeable sooner on the Tread. We do not recommend this to anyone who has joint issues or needs added cushioning in the deck. 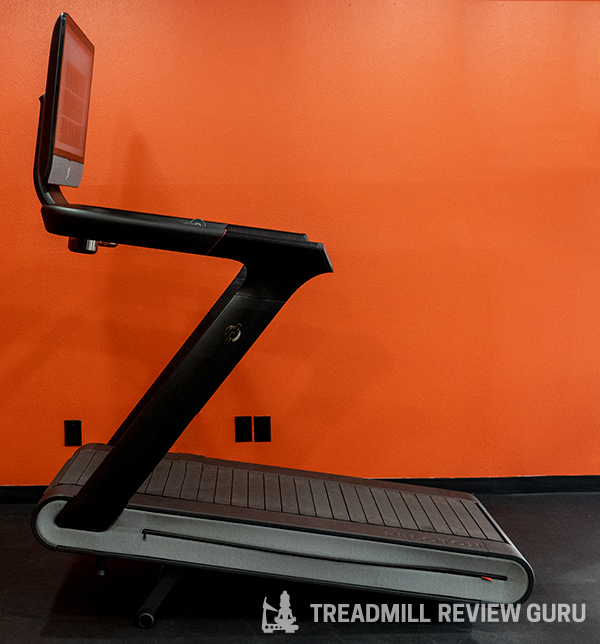 The Tread will incline to 15% but it doesn’t decline. Comparatively, the NordicTrack x32i (in the same price range, but with a slightly lower price tag) inclines to 40%, declines to -6%, has a 12mph max, and automated incline/decline and speed. The Tread is missing a little functionality here since a little decline goes a long way in adding training variables, and providing gentle conditioning to knees and quads. Automated incline and decline that syncs with Peloton programming would also be beneficial.

There are no pre-programmed workouts on the Tread. Unless you have a Peloton subscription, you can’t access any content. The only thing you see is the main screen. You can increase speed or incline and a gray bar along the bottom will display how fast you’re going, but that is all that is available without a subscription. 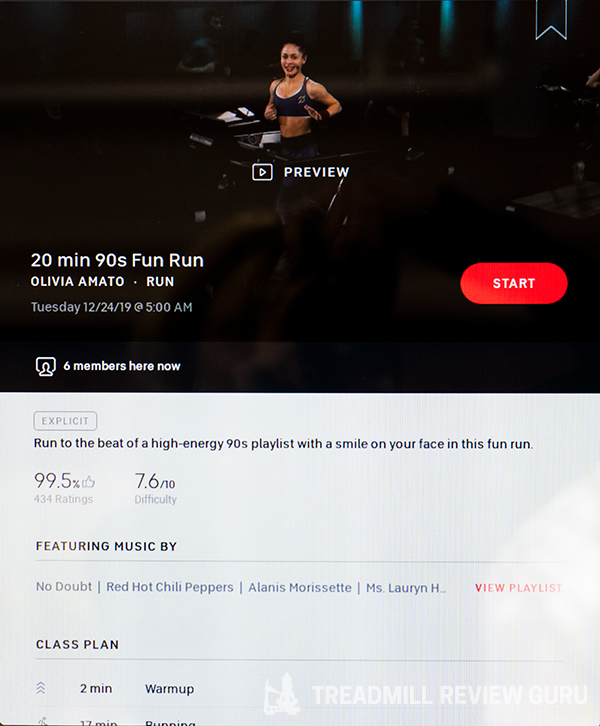 Subscription content is where Peloton really shines. Peloton has created some unique features that make exercising fun and addicting. Here is a general overview of the types and classifications of Peloton classes:

What we love about Peloton classes:

What we don’t love about Peloton classes

There are no trainer-led outdoor routes on Peloton. All programs are class based in a studio. The Scenic Ride option will display a landscape video, but there’s no audio or program to accompany it. If you love classes, then Peloton is great. If you would like the option of an outdoor route led by a trainer, there are better subscription services available.

The Tread motor is very quiet, but running on it is louder than other treadmills due to the nature of the deck and rubber slats. Cushioning in a treadmill deck helps absorb impact noise. The Tread does not have any cushioning aside from the rubber slats so it generates more impact noise while running.

The Tread does not fold up. It is very hard to move. Peloton recommends you select a dedicated space and leave your Tread there. This is not a machine that is designed to be moved often.

The Peloton Tread has a unique frame that is rugged and sporty. The 32” touchscreen and streamlined design are eye-catching and chic. Peloton has positioned itself as not only a fitness company, but a status symbol, and the Peloton Tread is great if you want to pay for it. Peloton’s subscription content is impressive and we like the slat belt design. However, with minimal cushioning, clunky control knob functionality, no fan, no speed/incline automation, and a limited warranty, the Peloton Tread is not worth its high price tag. If you are considering a Peloton Tread, we recommend looking at comparable models and doing a bit of research before you commit.